It’s just over a week since the madness of Sónar Festival began, and I have only just about recovered to string a sentence together to write this review. The same ritual occurs every year where I build a fanciful apparition around these short  summery days across the year, and it’s over with a blink in the eye. Yes, at the time I have my head in my hands, dragging myself to my bed vowing never will I put myself through such a hangover again, but in all honesty it was all worth it. And here I am, ready for Sónar 2018.

Sónar isn’t like any other festival I’ve ever been to before, and certainly brands itself as a festival of unique culture and utopian delicacy, completely distinguishing the differences from British festivals. However much I love the grotty survival element of UK festivals, there is something about the magic of Sónar that keeps bringing me back every year. A festival split into two, Sónar by Day, a portion of the festival where we enjoy the sun, discover hidden musical talent and embrace the blissful feeling of the festivities that are yet to come. Then we have Sónar’s alter ego, Sónar by Night, where the rave really begins. 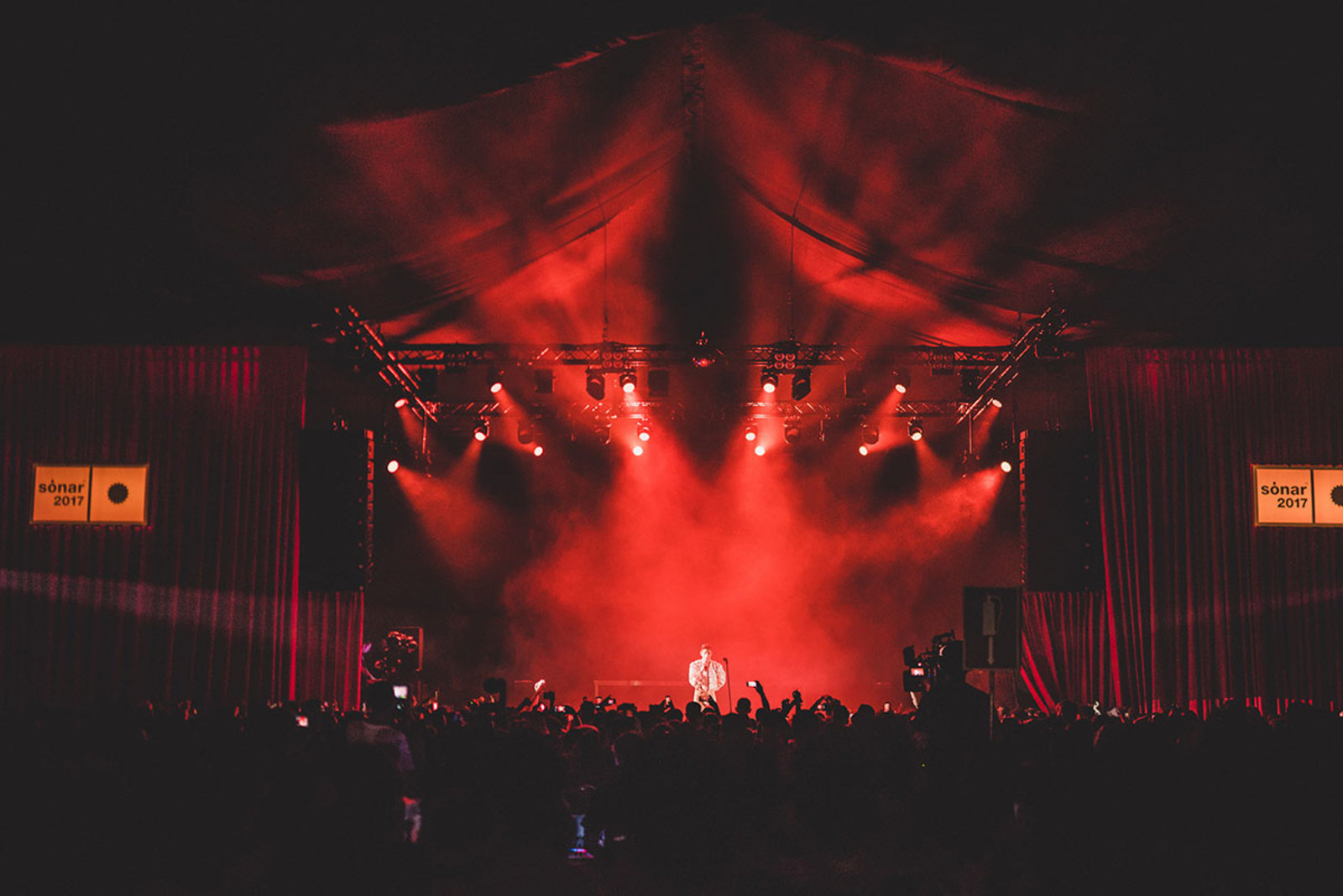 During Sónar, there is an inauguration of new friendships where there is a bolt tightening connection that you never knew was there; alongside the shared appreciation for music and happiness that brings us all together. The perfect way to describe this was The Black Madonna’s closing set on Saturday night, where all the punters linked arms together, stranger or not, and cheered on arguably Sónar’s best performing DJ. The pure happiness on her face was a representation of truly how much she cared for the music world, and without sounding like a wet blanket, it really filled my heart with warmth and admiration. That is why Sónar is so special to me, I have experienced some of the most beguiling moments of my life, in the secluded arena of Barcelona.

In comparison to the past two Sónar’s I’ve been to, the electronic scene has taken over the festival with a storm. Exciting headliners such as Dubfire, Nina Kraviz and Marco Carola give Sónar an unconventional cool edge, but the Sónar organisers still manage to complete the bill with urban gems such as Princess Nokia who took over Sónar Village on Thursday, followed by an astounding Stooki Sound on Friday Day and the unfiltered Giggs, shutting down the infamous Sónar Lab on Friday night. Grime was the chief focus of last year’s event, so it was comforting to music dibble-dabbers to enjoy a variety of genres outside of the house scene. 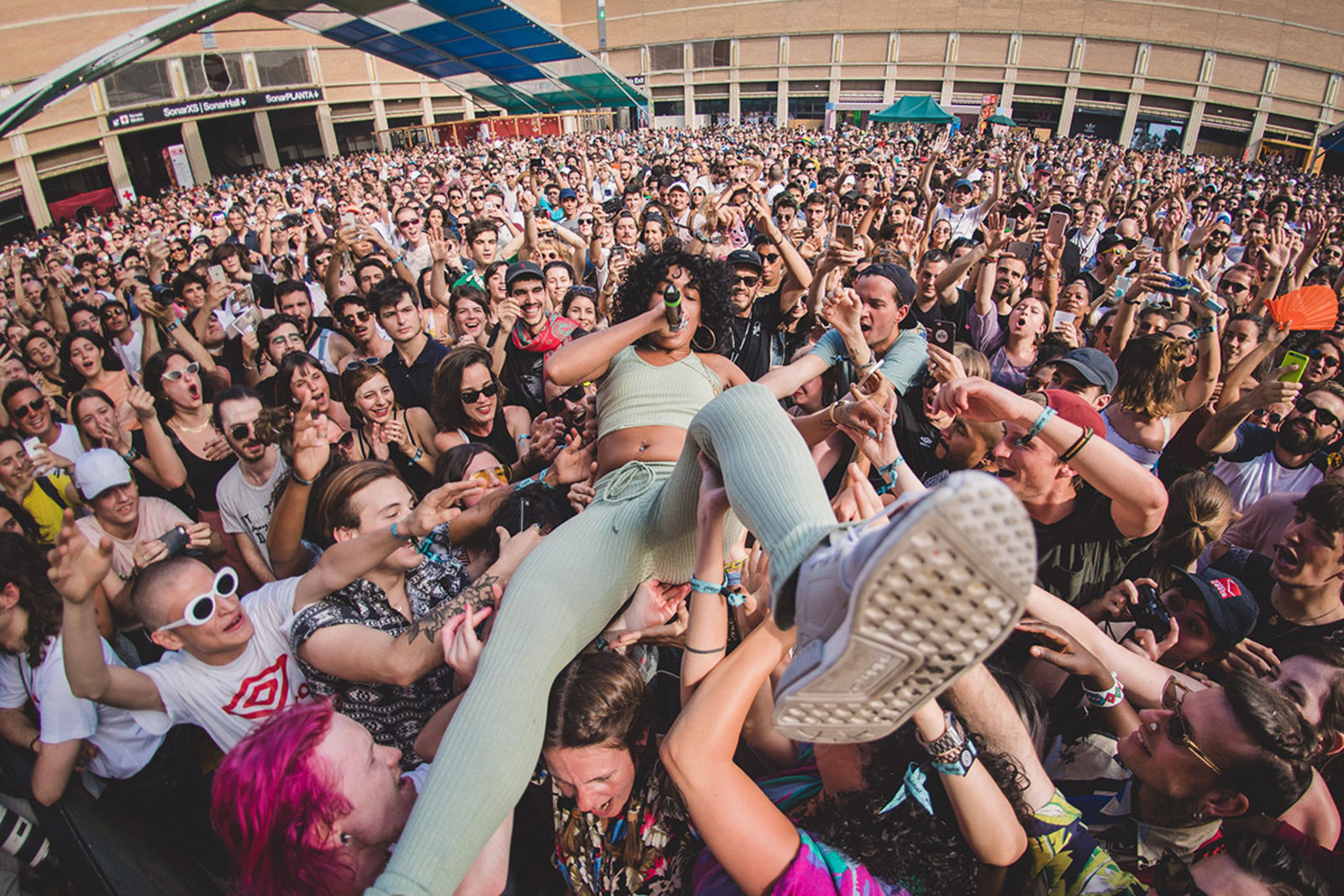 The artists that perform at Sónar call out a variety of emotions from us which we experience at high and low points throughout the festival. It isn’t just one wild rave but an emotional journey through the aesthetic adventure of artistic visuals and exclusive sound. This was particularly the case for the set of Forest Swords who performed at Sónar Hall on Thursday day. Inspired by hip hop beats, Matthew Barnes combines this with a dreamy, elusive electronic depth, and whilst the sound production is distinctive to say the least, it is the hazy visuals that capture my attention.

It’s incredible how the dynamic of the festival transforms from stage to stage. We begin Friday Day by a serenade from the soothing voice of River Tiber, an indie-pop idealist who sets the tone of Sónar Day, wielding inspiration into sun down. Followed by the gentle vocals of Fat Freddy’s Drop to the energetic bass of Damian Lazarus, and bam we’re thrown into Sónar by Night. At the larger, complex venue that is Sónar by Night, we are dropped into a maze of incoherent music. This is where you can distinguish the difference between the two events, where a larger proportion of people attend and it feels almost as if we’re tiny lego objects thrown into a gigantic world. We lose ourselves into the music at the hands of Moderat in Sónar Club and stick to each others bodies in the jam packed set for Nicolas Jaar at Sónar Pub. I can only really describe it as being clamped together as sardines in a tin. As I looked around me it was insane how much people packed out the outside space. That’s when I realised how large the area is, and all here to appreciate Jaar’s idiosyncratic expertise to eclectic jazz inspired electronic music. The Latino elements of Jaar’s productions is what inspires me the most, and what sets himself aside from his peers, and as to probably why he was such a hit. 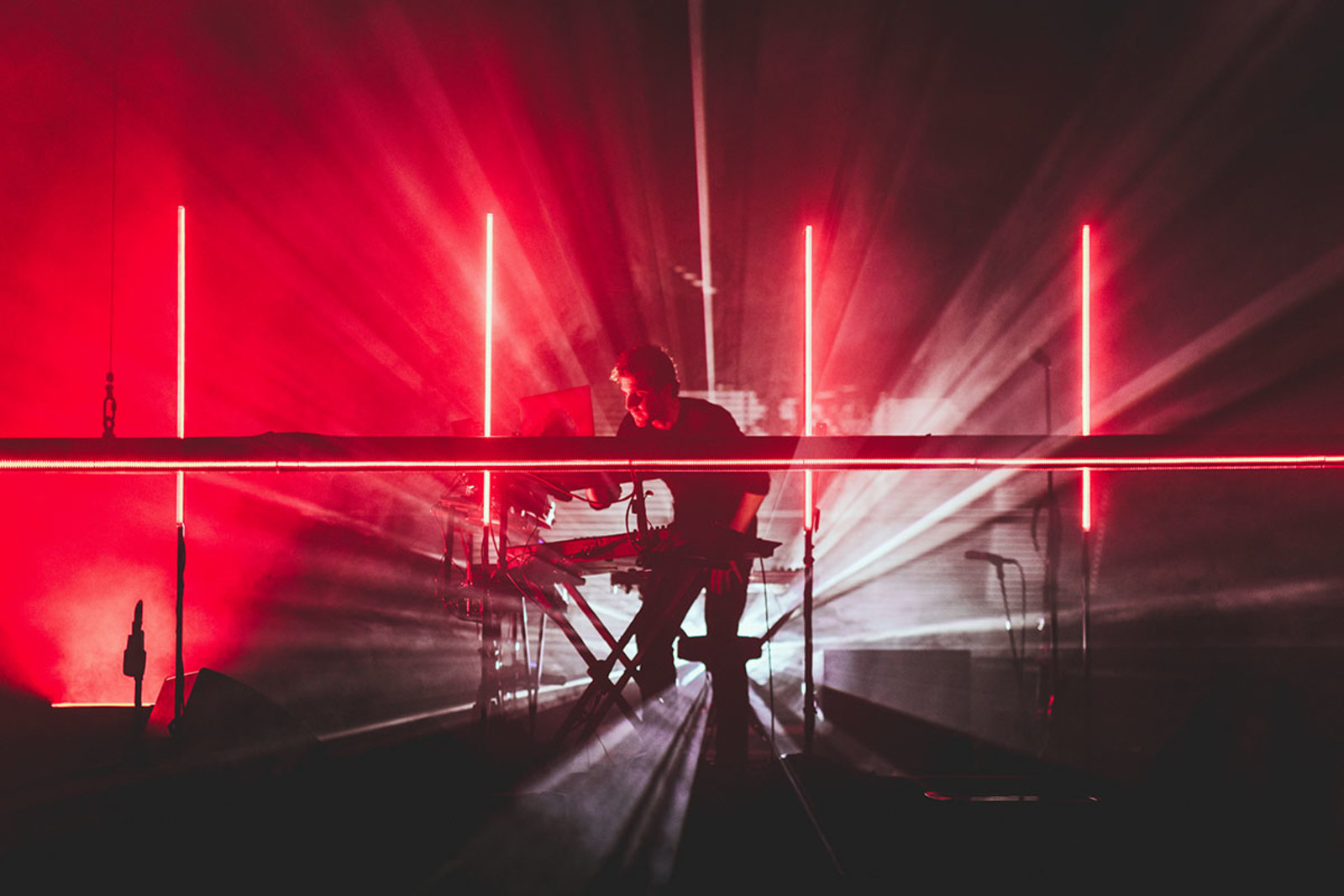 The most promising event of the night was AJ Tracey bringing British culture to such a diverse festival. You could tell he was a first for a large proportion of the crowd, but that was what made his fierce and catchy lyrics so intriguing to everyone around us.  AJ Tracey knows how to rile up a crowd and performed in such vivacious spirits that it made us feel proud to represent. When he dropped Pasta and Naila we went wild. Jumping up, down, left, right, chanting back to the lyrics and showing Barcelona what true grime was. 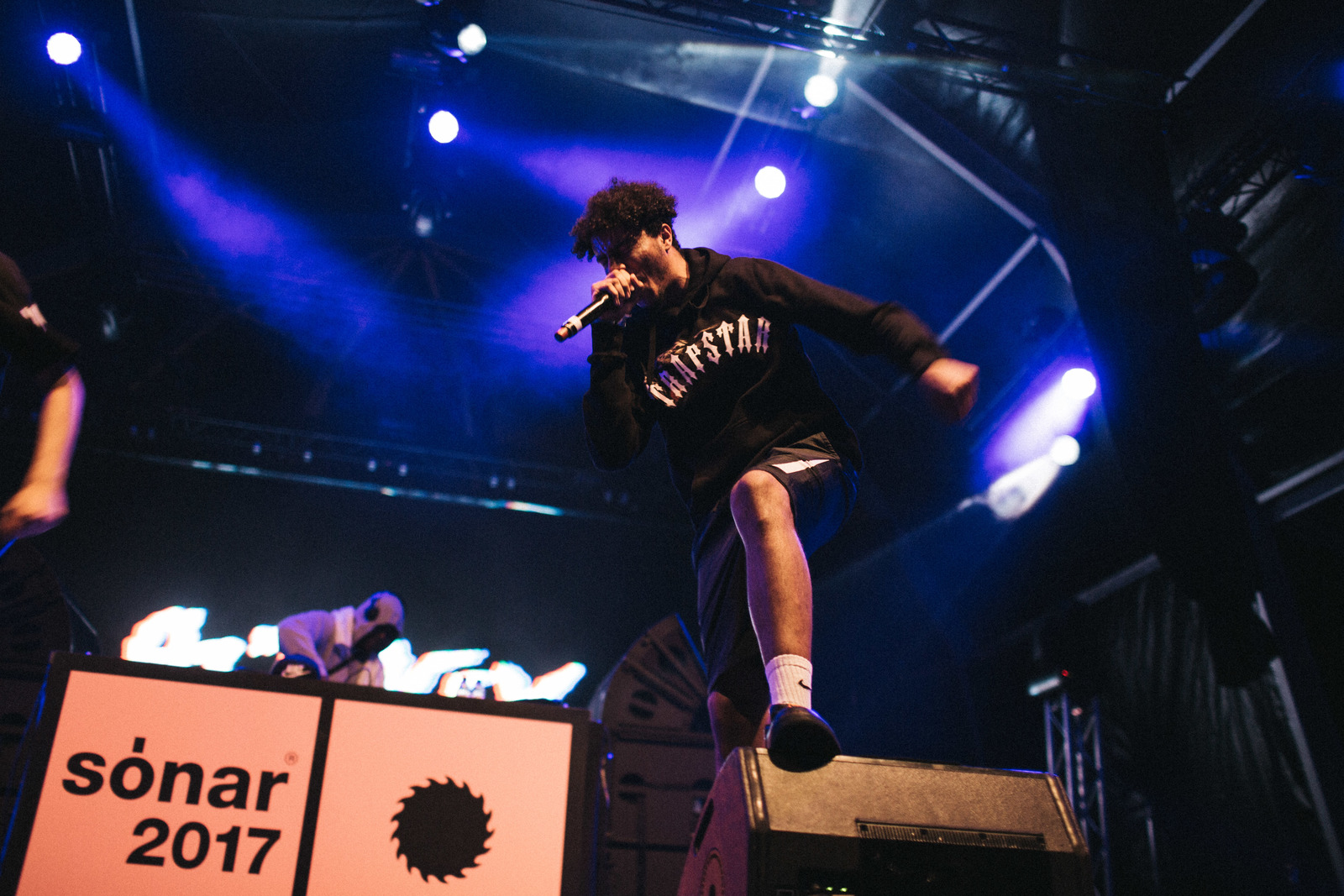 Before we knew it, Saturday crept around the corner and here we were at the last day and night of the festival which completely topped the rest of the festival with a fair mixture of imaginative visuals, skank worthy garage, Ibiza legends and pounding techno artists for the closing sets. Joe Kay and Jarreau Vandal who performed at Sónar Village took us by surprise with a buoyant mixture of club classics and vibrant hip hop, mixing urban favourites under the sizzling sun.  Flying high, we ventured over to Sónar Hall, where Sohn performed with an acoustic twist of Moderat style. The peaceful aspect of Sohn’s performance rested well with his audience, despite the variation of diverse atmosphere across the whole of Sónar Festival. 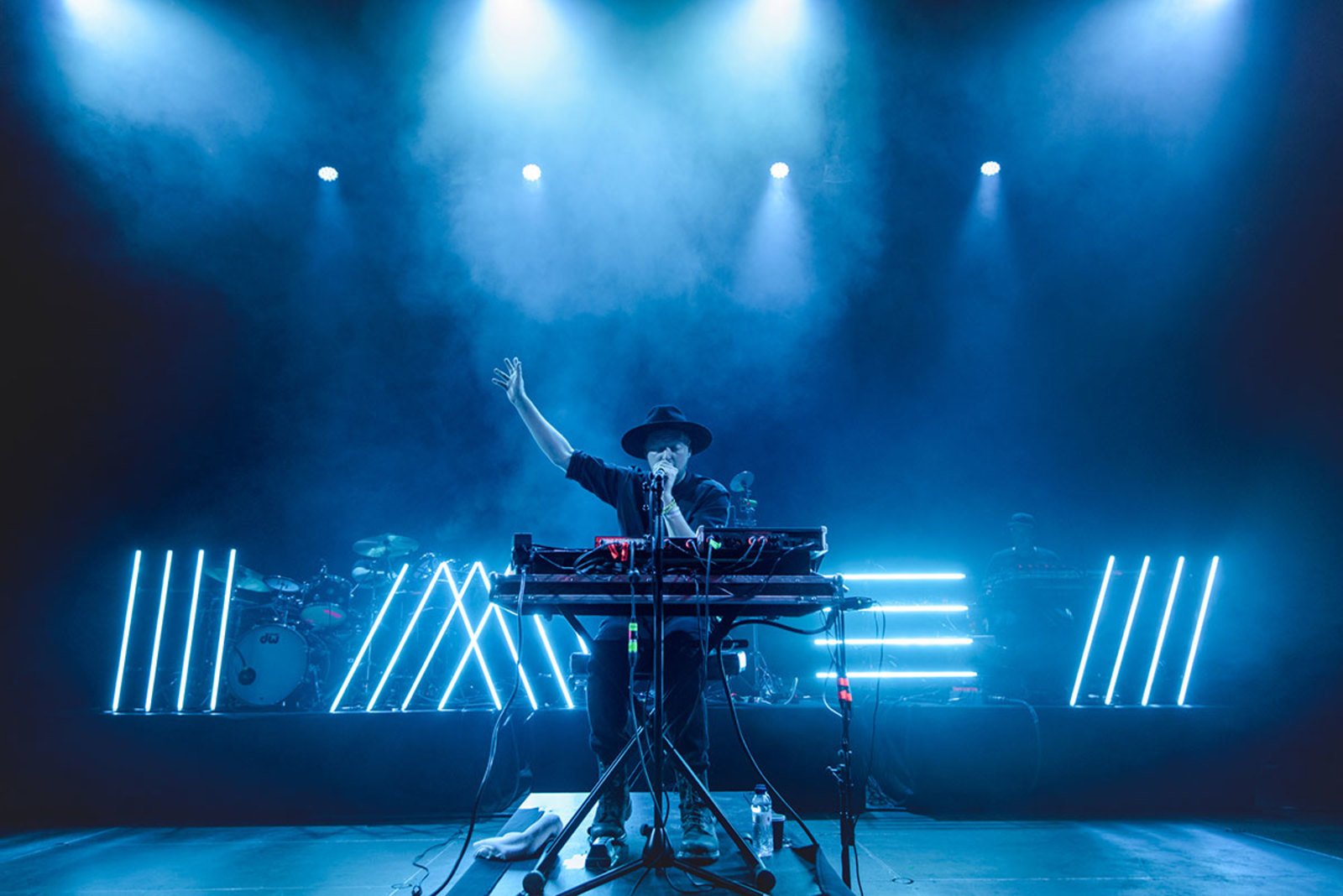 Saturday Night whizzed past us, and you know what they say.. Time flies by when you’re having fun! TQD, a three part collective of DJ Q, Flava D and Royal T performed at Sónar Lab, and although this stage wasn’t as busy as the others we skanked to the gritty beats and energetic garage tunes like we were in a warehouse rave. Flava D looking as cool as ever slickly subdued to the prolific resonance of each vibrant blast. This is a trait that each of the comparable artists shared, the will to produce incredible tracks whilst proving it is an effortless affair.

As the night went on, we gathered around the stage at Sónar Club, first to experience the booming beats of Heidi’s house classics, and later on to see the maximalist abstract techno of Ibiza prodigy Marco Carola. Each set completely out did each other. I can’t tell you whether it was the visuals, the passion or the quality of music but the crowd kept growing and packed out the whole of the arena. As I stepped into the scarlet carousel of Sónar Car, Seth Troxler’s synthesising experiemental techno perfectly corresponded to the room’s sharp projections. With more breathing space, this intimate stage felt like a secret society away from the madness of the other stages, whilst preserving a personal raving atmosphere.

My favourite aspect of Sónar is the musical escape during sunrise. We are ferried away with artists of such abundant standing and are lost in a magical voyage from sun down to sun rise. It’s a beautiful sight and the beaming disposition of the crowd is infallible. We bounced back to back between Daphni (Caribou) & Hunee at Sónar Lab and The Black Madonna at Sónar Pub. I have to say it’s The Black Madonna who stole the show for me, despite her inspiring choice of auspicious mixes, her high spirited attitude proved her dazzling determination towards electronic music. Every time I’ve seen her perform there is always a layer of glow upon her face, and as the sun rose and her set came to an end we all applauded in gratitude to a fantastic Sónar Festival. 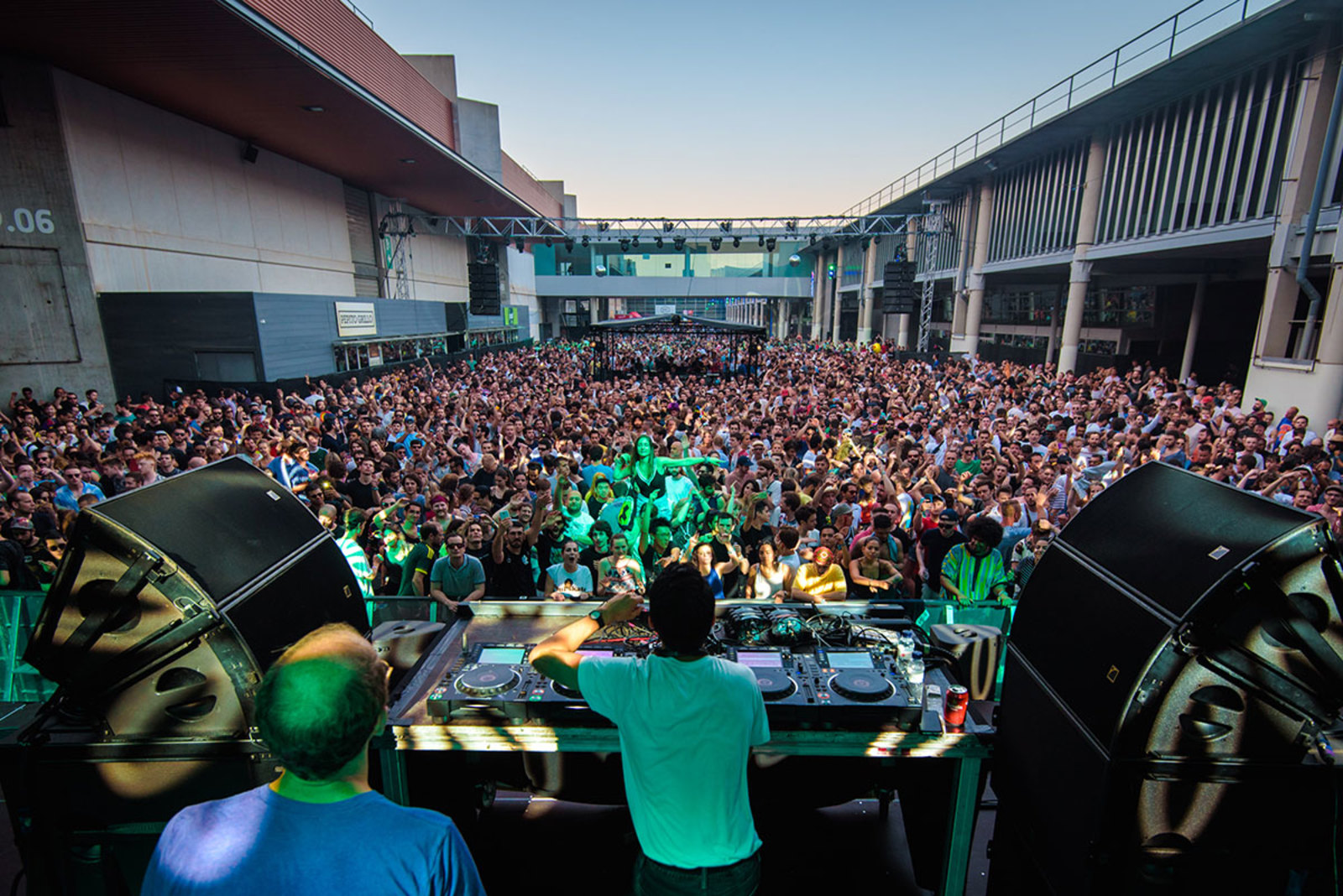 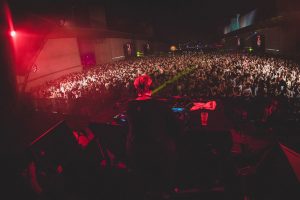