A Day Trip to Brighton

I rarely take the chance to get out of the big city and go on a local vacation in the UK. Spontaneously, my boyfriend suggested we take a road trip to Brighton. Of course, I jumped at the chance! We got on lastminute.com and booked a reasonable hotel, hopped in the car and off we went. I was super excited because exploring other areas in the UK isn’t an activity that usually springs to mind, and I tend to forget about all types of fun you can have outside of bustling London town.

We stayed at The Queen’s Hotel and Spa. It was a cute shabby chic hotel, which reminded me of what a hotel would look like in the 80s, with the crimson red decor in the lobby and a cramped information station next to the reception. It was delightfully charming nevertheless. We stayed in the Double Deluxe room with a Sea View, and the room certainly brought a modern twist to the hotel. 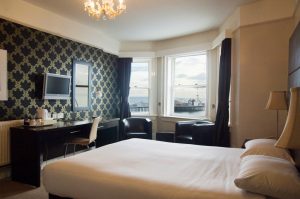 Eager to explore, we set off early evening to get our bearings. We breathed in the salty sea air and took a stride through the coarse windy weather and we found a quirky bar called The Western.  A secluded and intimate space, The Western boasted artistic culture with trendy bright lampshades focusing on the small tableware, and the walls were decorated with edgy pop art. I sat down with my go to g&t in hand, surrounded in a cool and hearty ambience. We were definitely in hipster central. 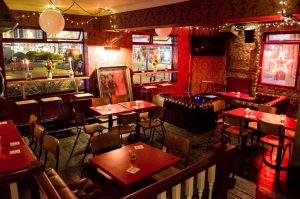 Our stomachs rumbling, we departed to hunt for a restaurant to feed our hunger, and that’s where we stumbled upon The Bohemian. A hidden gem, The Bohemian is a groovy jazz bar which is creatively decorated to take us back in time to where the brass music flowed, men who cooly smoke cigars and the ladies looked utterly fabulous. A huge fan of jazz culture, I was ecstatic to say the least. The bar was a particularly large venue; the ceilings rose far above the ground into the sky with a variety of instruments hung up from guitars, to violins to drums and so on. The chairs had carefully designed images of the Beatles, and the walls were made from brick with bookshelf artwork leading into the bathrooms. The bathrooms were designed to traditional 1920’s glamour dressing rooms, which I loved. To top of my experience in such a sophisticated but trendy bar, I ordered a Porn Star Martini cocktail, which came served in a glass which blew smoke out of it above the ice it was served on – super cool! 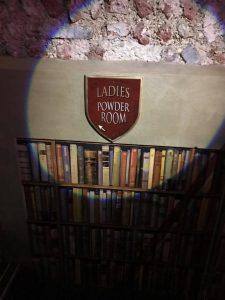 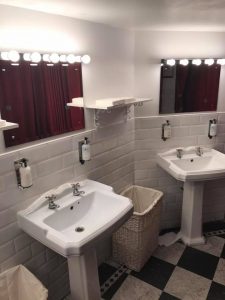 Desperate for food, we decided to choose a place which we knew considerably well, Zizzi. With 25% off, you can’t go wrong with traditional Italian food. I’m telling you, the food was even better than what I remember. A devote lover of cheese, we shared a crispy garlic bread with melted cheese and caramelised onion, and a three-cheese fondue, a melting pot of gorgonzola, gruyère & pecorino cheese. Followed by our cheese overload, I opted for the Primavera Rustica Pizza, which consisted of goat’s cheese, artichokes, spinach, fire-roasted peppers, olives, mozzarella, balsamic tomatoes, super green pesto and rocket. And of course, complimented with a sweet plum Merlot wine. A heavenly start to a perfect weekend.

After a wonderful evening, we decided to take to the streets of the hip Brighton town, where the area was full of personality and culture, ready to be discovered. After wondering around aimlessly, we admired the urban street art which was painted with such talent the pictures almost seemed real. The multi-coloured paintings certainly brought the vivid atmosphere to life.

We spent the first few hours of our afternoon at the Duke of York’s Picture House, which is the oldest built cinema in the UK, residing since 1910. As soon as we stepped through the doors I felt like we had walked into a vintage era, a vintage style décor with a traditional feel. The cinema was noticeably busy for a Monday afternoon, and I can certainly recognise why. 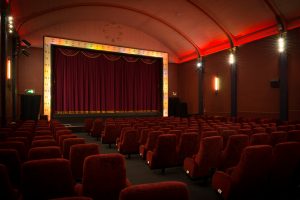 For the rest of our day we got lost in our own happy memories, trooping through the mysterious streets of the Lanes. Peeking into market stalls, small boutique stores and stopped for lunch at a intimately modern café called Bread and Milk. Feeling super hipster, we ordered a pot of tea (what else?!) and I waffled down my halloumi and avocado sandwich. 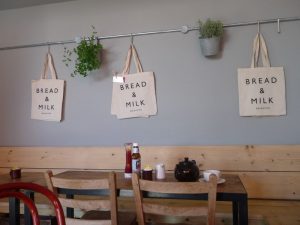 Looking back on the trip, I do wish we had to chance to do more, as I’ve heard Brighton has a booming night life. There was also a shop we passed where you could paint your own animal china – how awesome is that?! But we didn’t get around to it. But other than that, I had an amazing time and learnt a great deal about the culture of such a secluded location. I would love to go back again, and look forward to taking on more adventures.